The Red Dragon - otherwise called The Terminal Being - is a freedom fighter who was summoned by the Prophet with the mission to kill the Sovereign.[1] He is also the direct ancestor of Jedrek Tyler.

At the moment of the first annihilation of humankind, one man made contact with the newly-formed daimon, the Prophet. That man's direct ancestor living in the 21st century was Jedrek Tyler, making Tyler the contemporary human most susceptible to the Prophet's influence. Embracing the Prophet's guidance as his destiny, he rose against the Sovereign, but still the world traced the same path to destruction.

The Prophet retrieved the fallen fighter's body. To bestow on him another chance, Tyler would need a body capable of surviving long-term cold sleep and the cataclysmic process of resetting the world. The daimon implanted large quantities of both lamina and herald tissue into Tyler's body to see that realized.

Just as the Prophet had previously smuggled lamina from one iteration of the world into the next, he now brought with him a champion--a being now far different from the Jedrek Tyler that once was.

The Red Dragon is one of the many names of Satan, otherwise known as the Devil.

Satan (Hebrew: שָּׂטָן satan, meaning "adversary";[2] Arabic: شيطان shaitan, meaning; "astray", "distant", or sometimes "devil") is a figure appearing in the texts of the Abrahamic religions[3][4] who brings evil and temptation, and is known as the deceiver who leads humanity astray. Some religious groups teach that he originated as an angel who fell out of favor with God, seducing humanity into the ways of sin, and who has power in the fallen world. In the Hebrew Bible and the New Testament, Satan is primarily an accuser and adversary, a decidedly malevolent entity, also called the devil, who possesses demonic qualities. 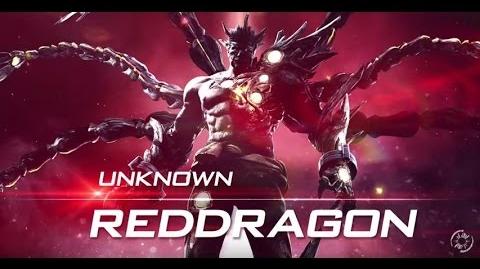 Retrieved from "https://riseofincarnates.fandom.com/wiki/Red_Dragon?oldid=5152"
Community content is available under CC-BY-SA unless otherwise noted.