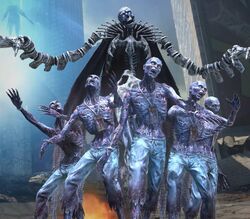 The Grim Reaper is the daimon bonded to Gasper Watteau.

In English, "the Grim Reaper" is the name often given to Death and, from the 15th century onwards, came to be shown as a skeletal figure carrying a large scythe and clothed in a black cloak with a hood.

Generally, the concept of Death as a sentient entity has existed in many societies since the beginning of recorded history. In Jewish tradition, Death was referred to as the Angel of Life and Death (Malach HaMavet) or the Angel of Dark and Light stemming from the Bible and Talmudic lore. The Bible itself does refer to the "Angel of Life and Death" when he reaps Egypt's firstborns, but he is not connected to Satan. There is also a reference to "Abaddon" (The Destroyer), an Angel who is known as the "Angel of the Abyss". In Talmudic lore, he is characterized as the archangel Samael.[1]

In some cases, the Grim Reaper can actually cause the victim's death, leading to tales that he can be bribed, tricked, or outwitted in order to retain one's life, such as in the case of Sisyphus. Other beliefs hold that the Spectre of Death is only a psychopomp, serving to sever the last ties between the soul and the body and to guide the deceased to the next world without having any control over the fact of the victim's death. In many languages (including English), Death is personified in male form, while in others, it is perceived as a female character (for instance, in Slavic and Romance languages).

Retrieved from "https://riseofincarnates.fandom.com/wiki/Grim_Reaper?oldid=4974"
Community content is available under CC-BY-SA unless otherwise noted.