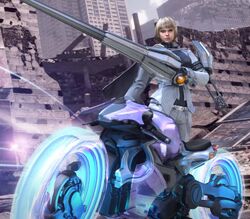 Brynhildr is the daimon bonded to Erendira Quinn.

Brynhildr (or Brynhild, in Teutonic myth) was one of the Valkyries.

The Valkyries were goddesses of fate, serving Odin on the battlefield by deciding who lived and died. They often rode upon horses, which may explain why Brynhldr appears as a vehicle in the game.

In the Völsunga saga, she was ordered to decide a fight between two kings, Hjalmgunnar and Agnar, and knew that Odin preferred the older king, Hjalmgunnar, yet she decided the battle for Agnar. For this Odin condemned her to live the life of a mortal woman, and imprisoned her in a remote castle behind a wall of shields on top of mount Hindarfjall, where she sleeps in a ring of flames until any man rescues and marries her. The hero Sigurðr Sigmundson (Siegfried in the Nibelungenlied), heir to the clan of Völsung and slayer of the dragon Fafnir, entered the castle and awoke Brynhildr by removing her helmet and cutting off her chainmail armour. The two fell in love and Sigurðr proposed to her with the magic ring Andvaranaut.[1]

Retrieved from "https://riseofincarnates.fandom.com/wiki/Brynhildr?oldid=4972"
Community content is available under CC-BY-SA unless otherwise noted.